A Taste of It All: Study, Teach, Volunteer, and Life After Study Abroad 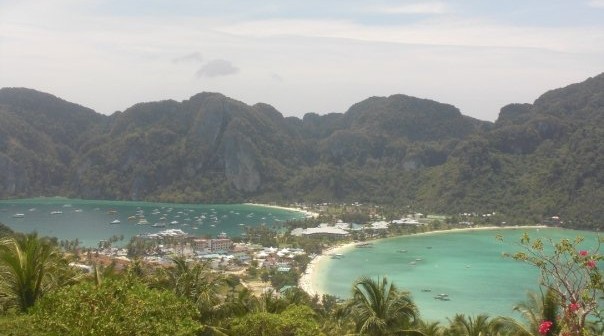 “Since I was 17 years old I knew I would study abroad.”

My family took me to visit my sister during her semester of study abroad in London.  I fell in love with traveling and the sense of adventure provided at every corner—everyday tasks such as going into a convenience store or reading a local newspaper became exciting!

Since then, I have tried a little bit of it all: studying in London through one of my university’s study abroad programs, teaching English as a Foreign Language in Mexico and in Thailand, volunteering on a farm in Costa Rica, and finally serving as a United States Peace Corps Volunteer in rural Nicaragua.

I can honestly say that each experience helped shape who I am today, and I wouldn’t change that for anything.  I highly recommend that anyone even remotely interested in living abroad whether it be to study, work, or volunteer, pursue that dream wholeheartedly.

I decided to participate in a traditional study abroad program my junior year in college.  Visiting my sister and talking with her about her experience when she returned definitely led to this decision.  I went to a few informational sessions at my university and began the process of applying for the program.   In London, I had small adventure after small adventure, studied theatre and went to plays, and interned for a homeless shelter.  The thrill of studying classic plays such as “The Phantom of the Opera” or “Les Miserable” and then going to watch them come to life in venues such as “Her Majesty’s Theatre” is a thrill that stuck with me.   During my internship, I worked directly with the homeless population of London.  I met individuals with varied stories from all over Europe—and battled daily to understand the different accents.  I had the opportunity to travel on school breaks and before the program started.  I fell in love with meeting people from all over the world, taking naps and having picnics in beautiful parks, riding trains, going to museums, staring in awe at century old buildings and churches, and getting lost.

After graduating from college, I wasn’t exactly sure what I wanted to do.  My older brother had spent a year teaching English in South Korea, and his story inspired me to look into teaching abroad.  I began scouring the internet for teaching positions and TEFL Certification programs.  An excellent, comprehensive source of information for anyone considering becoming certified to teach English as a Foreign Language is “Dave’s ESL Café”.  This is where I found the program of my choice, and after saving for a few months, I found myself on a plane to Puerto Vallarta, Mexico where I received my certification and taught for a semester.  Although you can make a lot more money in South Korea, I chose Mexico because I wanted to improve my Spanish and it wasn’t too far from home.  I remember my first day of training clearly—especially because you were left to your own devices to teach your first one hour class right on that very first day!  I was terrified.  But I did it. And I kept doing it. And I improved and enjoyed it immensely.  I remember loving my walk to work each morning—the smell of the ocean and the green, lush mountains in the background.  One of my fondest memories of this particular adventure was going on a trip with our school’s secretary and her family.  They took us to a remote village only accessible by boat where her husband had been working to install a few simple power lines.  I played in the crystal blue shallow waters with her two little boys, building sand castles and making sand angels.  We spent the night in hammocks just outside someone’s house, making jokes and staring at the stars until sleep came over us all.

A lot happened after my stint in Mexico.  I thought I was finished traveling, and I tried my best to fit into the world back home.  I soon became disgruntled and realized I wasn’t ready yet.  I signed up for a volunteer program in Costa Rica through a private exchange company called “World Endeavors” who set up all the details for me.  I found this particular company by searching the internet and comparing their program and fees to other companies.  I also noted how quickly, thoroughly, and professionally they responded to all of my inquiries.  I worked very hard at an agricultural university in the mountains of Costa Rica, lived with a host family, and received one-on-one Spanish classes a couple times a week.    I fell in love with my host family—and went back a few times after the official program had ended to see them again.  Each day on the farm felt like I was living in a PBS or National Geographic special.  I fed iguanas, peacocks, and crocodiles.  I dressed head to toe in a bee keeper’s outfit and removed honey from beehives.  I got down and dirty and learned words in Spanish I never thought I would need to know, such as “carretilla” or wheelbarrow.  I had the good fortune of being able to travel through much of Central America after my one month program ended and immediately noticed how much volunteering and studying the language enhanced my travels.

There and Back Again

I returned to the United States with high self-esteem and a new perspective.  I was pretty sure I would travel again, but had to work and save some funds in the meantime.   After a couple years of working a myriad of jobs such as “bill collector”, “receptionist”, and “barista” I bumped into a man with similar interests and a passion for travel.  We spent a couple summers working together in Denali National Park, Alaska and eventually found ourselves teaching English together in Bangkok, Thailand.  We found this opportunity through an excellent website, www.ajarn.com , which is specifically designed for those seeking information about teaching in Thailand.  Thailand is a stunning country and Bangkok, though overwhelming at first, is also amazing.  I remember stepping out of the airport at 2AM, and being hit with a wall of heat.  After living in Alaska, we wanted to go somewhere warm and after living inside a National Park, we wanted to live in a city, and not somewhere so isolated.  We certainly got both.  I remember seeing an elephant walking down the street during our first taxi ride—welcome to Thailand.  We had the privilege to interact with many wonderful Thai people through our job and our daily visits to street food vendors.  We also made friends from all over the globe who were also there to teach, and we were able to travel on school holidays and after our contract ended.  Shortly thereafter, we were married and decided to pursue another common dream- joining the Peace Corps.

Before we had ever met, both my husband and I had started applications for the Peace Corps, but never could quite convince ourselves to finish them.  I think the 27 month long commitment scares a lot of people off, not to mention the notion of going where you’re needed, not necessarily where you want.  There is plenty of information on the Peace Corps available on their official website, www.peacecorps.gov, as well as by searching “peace corps blogs”.  Until March of 2013, you could also view thousands of volunteer’s journals at www.peacecorpsjournals.com, but the site is currently off-line due to lack of funding.  If you are considering the Peace Corps, it is a good idea to attend a few casual information sessions, which are often held at coffee shops or restaurants in cities where recruiting offices are located.  Also, many larger universities have a recruiter/office located directly on campus.

Our time in Nicaragua was well spent—we lived in a small, very isolated agricultural town and worked one-on-one with local high school English teachers.  We designed and facilitated workshops for teachers in our region—teachers who have very little access to any resources.  We rode busses on dirt roads and hitchhiked between towns in order to make these events possible.  We went to weddings, birthday parties, and funerals.  We offered free community classes for kids and adults—we worked with the local community to build a classroom out of plastic bottles and “clean trash”.  But most importantly, we formed strong relationships with our community and gained second families.  While we worked hard to make a difference and give back to this beautiful country, I definitely feel that I received more than I gave.

It has been an amazing ride, I have friends and people I consider family all over the world.   My eyes and my heart have been opened to so much I could never previously imagine.  I have gained language skills, teaching and professional skills, and the ability to adapt to any number of strange and difficult situations.  I have found myself happier than ever, content to sit on the dirt and share cups of coffee and plates of beans on farms in literally the middle of nowhere.  Don’t get me wrong, taking the road less traveled isn’t always easy and glamorous, and you may encounter some resistance in regards to your choices, but ultimately they are your choices.

As a result of all of my personal experiences, I am now pursuing a career in International Education and graduate studies in Higher Education Administration.  I am ready for this next chapter, and though I will always love to travel, I am ready to unpack my bags and help others pursue their dreams.

*The views and opinions in this article are the author’s own and in no way reflect the views of the US Government or the Peace Corps.

Julie Westerman graduated from Texas Christian University in May 2004 with a BA in Sociology.  During college, she studied abroad and interned in London, England.  After graduation, she became certified to Teach English as  Foreign Language in Puerto Vallarta, Mexico.  Since then, she has taught English in Thailand, volunteered on a farm in Costa Rica, backpacked through much of Central America, worked in Denali National Park in Alaska, and most recently served as a United States Peace Corps Volunteer in Nicaragua.  She is currently pursuing her Master’s in Educational Administration at the University of Texas at Austin in the hopes of helping others fulfill their dreams.

No Responses to “A Taste of It All: Study, Teach, Volunteer, and Life After Study Abroad”