5 Lessons for Adulthood After Study Abroad 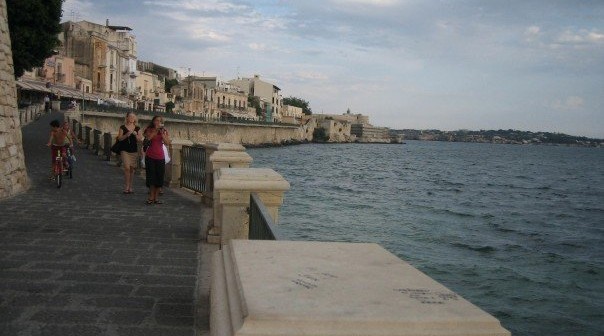 “Figure out a way to preserve your experience in a way that is meaningful and useful to you.

I applied for my study abroad program as a sophomore at William and Mary in 2007. According to my essay – a plea to spend the summer in Siracusa, a small town on the southeastern coast of Sicily – I hoped to gain “exposure to international culture” from the experience. Though it’s probably the best way I could have characterized my wanderlust at the time – never having left the country save for a brief family trip to Canada – the word “culture” is still perilously vague; a blanket term meant to encompass all manner of international sins and adventures. The six-week program in Sicily was expensive and the creative writing coursework only tenuously linked to my degree (English) – realities that came into sharp relief as I prepared to go.

Was this an actual educational experience or some glorified vacation? Would I derive any real skills? How could I even begin to measure them if I did? The journey was transformative, though, and the start of an enduring love affair with Italy: I returned twice more – once as an intern for the Peggy Guggenheim Collection in Venice and once as a tourist – before joining the The George Washington University School of Public Health and Health Services as a community outreach coordinator. I realize now – seven years, two return trips, one degree and several jobs later – that these experiences prepared me for the workforce in ways I couldn’t have anticipated. Here are some of the lessons I still use on a daily basis:

1. Speak the language. If you’re only in town for a summer or semester – and you’re not already studying the native language – it’s tempting to “get by” with some basic vocabulary, solid pantomime skills and a big smile. Don’t do this! I’m not just talking about vocabulary, either: pay attention to the way people order their drinks, hail a taxi or address their friends. In the working world, “speaking the language” could mean anything from office etiquette to technology. But whether you’re trying to find a trattoria or learning a new software, people notice when you make a concerted effort to understand them – versus learning just enough to get what you want at a given moment.

2. Get hopelessly lost. This is always the first thing I do when I get to a new country. I should note, though, I’ve only traveled to areas of the world where civilian and tourist safety are rarely called into question – so, obviously, this one is subject to discretion. It’s easier in some places than others (I’m looking at you, Venice), but getting lost is the best way to learn more about your surroundings – and a crash course in feeling confident in the absence of a plan.

3. Cultivate a daily ritual. I committed to writing every day in Sicily: letters, journal entries, essays, poems, stories – anything. I sent hundreds of description-rich emails to loved ones at home. I took notebooks everywhere and filled them from cover to cover. There’s a lot to be said for doing work that is valuable to you in an unfamiliar environment, and I created a lot – but not because I was consistently inspired by my surroundings. I was much less inclined to write during bouts of homesickness or jet lag. But the days that required more of a push were the most important of all. Here’s why: almost every job for which I’ve applied since – my current position included – was looking for a “self-starter” who could “work independently.” These phases get thrown around a lot, and after a while they start to sound like jargon rather than actual applicable concepts or skills. But they don’t just refer to people capable of generating a lot of great ideas – they refer to those who approach and execute boring or difficult tasks with the same diligence as they do exciting ones. Cultivating a strong creative work ethic outside of your comfort zone is even more difficult, but a real boon once you enter the working world.

4. Balance raving and reflection. There’s a lot of pressure to see and experience everything when you go abroad. The feeling is invigorating for some and exhausting for others. As an introvert, I find it draining to engage with big groups for long periods of time and energizing to spend time alone or with small groups. Some of the extroverts with whom I traveled, alternatively, would have had trouble spending an entire day “getting lost” – something I relish. This is all to say that being abroad is the ideal opportunity to test new ways of processing information and relating to people. For me, that meant issuing and accepting as many social invitations as I turned down. Extroverts, alternatively, might practice spending more time alone. Some people may find that their threshold for social interaction – however high or low – isn’t subject to alteration, and that’s fine. Whatever you discover will tell you something important about the way you contribute to a team in the working world. I learned, unexpectedly, that I prefer work that balances extroversion (say, outreach and group work) and introversion (solitary writing and editing tasks) and sought positions with that in mind.

5. Keep the details close. Figure out a way to preserve your experience in a way that is meaningful and useful to you. My method was writing, but some of my friends took hundreds of pictures. Others saved every train ticket and beach rock they encountered. The point is, many of us began a process of recordkeeping that would be helpful to us later. Being able to conjure details or retell adventures in specific fashion tells people that you’re a keen and active observer of the world around you – I can’t tell you how many interviewers, employers and mentors have since asked me about this trip, and how many have been impressed when I was able to tell a story rather than regurgitate a class schedule. I tell them about shuffling through shin-deep ash on the slopes of Mount Etna or the bowl of salmon fettuccine that nearly convinced me to cancel my flight home. I still remember the overpowering scent of wintergreen that emanated from my suitcase upon arrival, when my economy-size bottle of mouthwash exploded during the flight and dyed half of my clothes a lovely shade of mint. I tell them about dancing to Italian pop songs in the cavernous, living room of the apartment I shared with five other girls, and spitting out my first sip of limoncello (I have never, in the years that have followed, acquired the same affinity for the taste as I have the melodic name). I recall the time I nearly dove into a cloud of jellyfish off the coast of Taormina, and the Venetian bartender who warned me that ordering cappuccino after lunch is like wearing a neon “Tourist” sign around your neck (arguably the most important lesson of all). The details count. Figure out a way to keep them with you.

Emily Newhook is a community outreach coordinator for The George Washington University School of Public Health and Health Services. Outside of work, she enjoys writing, film studies and powerlifting. You can follow her on Twitter @EmilyNewhook.

One Response to “5 Lessons for Adulthood After Study Abroad”