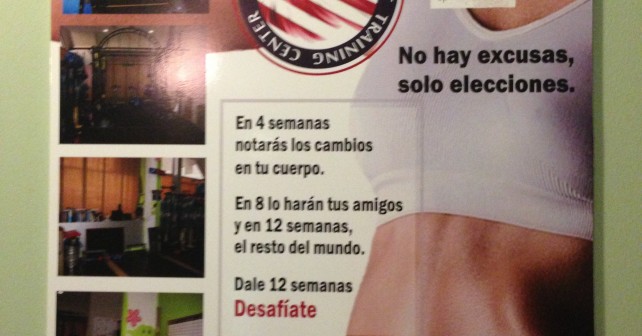 “Swimming through chlorinated water is a beautiful feeling. It’s a fluid, almost ethereal sensation, as though nothing else matters but the arm’s smooth stroke. What’s more, swimming is swimming, no matter what country or culture you find yourself in. The trouble is how we view the pool and ourselves change as we cross national borders.”

There are a huge number of cultural differences that emerge in your first days in a new culture, from dance to grocery store layout to traffic patterns. Each variation from our sense of “normal” affects the American mind differently based upon regional origin and previous exposure to other cultures. Amid that plethora of differences, however, the one that struck me most during my semester abroad in Spain was exercise.

The United States is, in some respects, a contradictory enigma. On the one hand, ours is statistically the second fattest country in the world (Mexico has held the dubious distinction of first since 2013). According to the United Nations, about 32% of Americans—nearly 1 in 3—are obese. Our high-sugar, high-fat intake (generally speaking) contributes heavily to our growing national waistline. Even in my home state of Colorado, second skinniest in the nation, 1 in 5 people are obese, a testament to American dietary and exercise patterns.

On the other hand, the image the American media portrays to the rest of the world reveals something very different from those nauseating statistics. Beamed into televisions around the globe, including in my study abroad destination of Granada, Spain, are high-profile images of thin, fashionable celebrities such as Angelina Jolie and Zac Efron. From the United States comes a sensation of glamour, attractiveness, and near-obsessive concern with our bodies. Peoples in many parts of the world simply cannot comprehend the value of this contradictory mania, and rightly so: despite its global reach, our culture is virtually impossible to understand.

And we come to exercise.

Upon my arrival in Granada, I sought out a decent gym and was immediately struck by their ubiquity in the small city of only some 237,000. Around every corner was a little business offering the use of treadmills and free weights for just a few euros per month. Ultimately, I joined one of the largest, newest gyms in the city, paying fifty euros per month for access to a pool, comprehensive weight room, and free yoga classes…all certified by the American Sport Training Center.

In my first visit to this gym, I planned to take a swim to stay in shape for my college’s varsity swim season. I entered the almost sterile pool area barefoot and toting only my goggles. Big mistake number one. Immediately, a lifeguard approached and politely reminded me of all the bacterial diseases I would undoubtedly contract were I to continue on deck without the plastic sandals worn by the native bathers. After grabbing my flip-flops from the locker room, I returned to the pool and hopped in without a bathing cap. Big mistake number two. The same lifeguard worriedly tapped me on the head after a few laps, begging me to use a cap for the sake of the other bathers. Lice and dandruff, you know. I acquiesced.

Minutes later, after slamming my head on the pool wall while attempting backstroke turns, I hopped out and asked the lifeguard what the length of the pool was. He looked at me, bemused. “Pues, exactamente 20 metros, claro.” Twenty meters? The typical pool length in the United States is 25 yards, or 22.8 meters, and 25-meter pools are common enough at home. But 20? No country uses 20-meter pools for competition, and the difference in lengths is noticeable to swimmers doing backstroke. I had to make a mental adjustment for each turn I made at the wall to avoid a concussion.

For the rest of my time abroad, I swam in the same 20-meter pool. With every visit, the pool staff would pleasantly smile at me as I hopped into the water. Once, I was even approached by the same lifeguard, who politely asked if I was Norwegian in origin, or perhaps German. When I replied, “Soy estadounidense” (American), the lifeguard looked astonished, exclaiming that he “had never seen an American without love handles except on television.” Talk about a mixed cultural message emanating from the United States.

At times, the complexity of the American image abroad can be astonishing. Within the first few days of my semester abroad, I had been exposed to the conflicting cultural stereotypes surrounding our country: fat yet glamorous, ignorant of local exercise rules yet American fitness authorities certify gyms around the globe. While in Spain, the contradictory notions of my own identity as an American manifested themselves whenever I went for a swim, a run, or to lift weights. I always got the sense I was noticed, not for my attire or accent, but for an invisible sense of Americanness I possessed. Though at home swimming without a bathing cap or walking on deck without shoes is quite common, in Spain those activities were incomprehensible. As I adapted to Spanish exercise norms, I became conscious of my Americanness. I always wondered which image of the United States truly prevails in the mind of the rest of the world. Perhaps like my time adjusting to Spanish customs, that image will forever remain confused and conflicting. Perhaps only Americans who travel abroad, spreading a less publicized though healthier image of Americanness to the globe can change it.

Erik Laitos is a junior (class of 2015) from Golden, Colorado studying History and Political Science at Colorado College. He is an avid swimmer and runner, as well as involved student leader with experience in the United States Senate. Erik plans to enter the U.S. Foreign Service after his graduation, and eventually hopes to earn a Ph.D. in History, both ambitions driven by studying abroad in Granada, Spain in Fall 2013.

No Responses to “Staying in Shape: Reconciling Our “Americanness” Abroad”