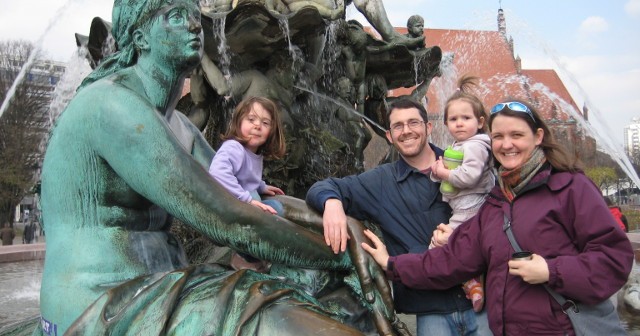 For many, the taste of a life abroad comes while still young and unattached, before life becomes too entangled with many contradictory passions, relationships, and obligations. This is in part what makes that first time in a totally different world so doable. Furthermore, the opportunity to follow one’s exploratory nature, unencumbered, holds the key for many individuals’ growth. With age however, comes new attachments and priorities that can make living abroad more complicated, but at the same time, bring unique opportunities for individual and shared growth.

The forging of one’s own nuclear family—the significant other, the kids, the pets (to be discussed next time!)—is accompanied by its own set of adventures, challenges, and perspectives for a life-path that once seemed oh-so-straightforward. The ways that these relationships shape our go-abroad decisions and experiences differ from person to person and circumstance to circumstance, so this article shares the different experiences of several graduate students and professionals who have had to balance their own nuclear families with going abroad to live, work, learn, and conduct research.

Hillary is a medical anthropologist, public health scholar, blogger, and doula who had long planned to conduct her dissertation fieldwork in Germany. In 2008, while pregnant, she applied for a fellowship to support collection of pilot data in Berlin; in January 2009, she went into the field with her then 7-month-old daughter and because her husband was unable to take the month off of work; her mother. Roughly three years later, Hillary returned to the field again, this time for a full year and with the whole family in tow (her husband and now two daughters, aged 3.5 and 1.5 at departure). 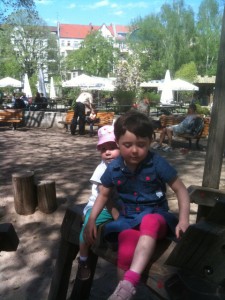 What was a special benefit of having the family with you?
“[My husband and I] saw a whole different part of the city that we would never have seen if we were there on our own.  We met a whole different set of people—other parents, teachers, etc.—that we would never have met otherwise.  We became playground experts.  We found an amazing Kindergarten (German preschool) for our 3.5 year old too.”

[Were there any surprising or unexpected challenges?
“While looking [for an apartment] I often got the feeling that kids were not welcome, even for apartments that specifically said they were dog-friendly.”

Was there anything that eased the challenges of living abroad with your family?
About her first trip: “I ended up waiting until she [Hillary’s older daughter] was 7 months old and asking my mother to come with me. Luckily she could take a month off of work with no problem, and I could use part of my fellowship for childcare.”

About her second trip: “I got an amazing $40,000 fellowship for my fieldwork, none of which I was allowed to use toward childcare because they ‘just categorically don’t fund that sort of thing.’ Thankfully I got other funding that was happy to pay not only for childcare, but also for my husband to live with us—the German government is fairly progressive that way.”

Christine is a doctoral student currently conducting dissertation research in the Dominican Republic. A Fulbright Scholar, she will remain in her field site for at least 10 months, possibly longer. She left for her field site in February and was followed by her husband a few months later. As one might expect of adults in their thirties in 2014, Christine and her husband have material baggage and financial obligations, things that required managing before they were able to settle in and embrace the adventure. Her husband left his job of 8 years to accompany her, leaving them dependent on her Fulbright stipend—a circumstance that she described as “scary at first, then strangely liberating”—definitely a sentiment parallel to life abroad as a whole.

What was a special benefit of having the family with you?
“It’s been amazing being able to share this experience with [my husband]. . . . The cultural exchange piece of this project has been invaluable, but sometimes it’s just nice to be able to look at somebody who has the same frame of understanding as you and go, ‘WTF just happened!?’”

Were there any surprising or unexpected challenges?
“It creates a weird power dynamic where the non-grantee partner is dependent on the grantee for everything—which gets demoralizing, since you likely had equal autonomy in the States. . . This kind of happened to us—I got here first, and adjusted my Spanish to the way Dominicans talk. Mike speaks great Spanish, but Dominican Spanish is VERY different. VERY. So, the first month he was here, he was forced to rely on me to interpret in many situations, which he found difficult since he already spoke Spanish. It was frustrating for him because he was like, ‘I speak the language! Why can’t we understand each other!?’, but then his abilities and Dominican-accent started to improve so now it’s fine.”

Was there anything that eased the challenges of living abroad with your family?
“Though I work often, I set my own schedule, so I can take time off whenever I want. We’ve made time for some pretty amazing long-weekend trips, since travel is astoundingly cheap here.”

Amy, a mother of one and an interdisciplinary behavioral scientist, studied HIV in sub-Saharan Africa. Long before her daughter, Chiara, came into the picture, she planned to collect data for her dissertation in a relatively remote field site in Malawi. A new mother committed to breastfeeding and attachment parenting, Amy never questioned whether or not to bring Chiara with her; so when her daughter was only 4 weeks old, Amy began to plan for the 10,000 mile journey, kiddo in-tow. 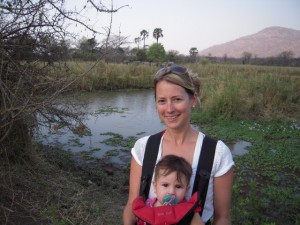 What did you learn from this experience?
“In hindsight, I am not sure why I decided to bring [Chiara] with, as it ultimately wouldn’t benefit her directly. I think I wanted to prove something to myself, and to society, that I could manage this life I’d chosen as a mother, wife, and scientist. Except that my idealistic perspective of conducting research in Africa with Chiara quietly hanging on my back was so incredibly mismatched with reality. . . . When I look back at these experiences, I don’t regret my decision to bring Chiara with me at such a young age. I am extremely thankful that she was ok and didn’t suffer any trauma. The experience really gave me an opportunity to look introspectively at myself, and my role as a western scientist and mother, and my own internal biases. 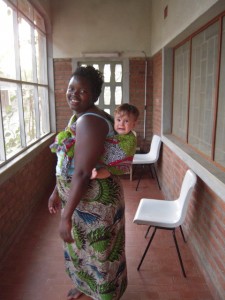 Chiara with her nanny

Were there any surprising or unexpected challenges?
“Perhaps one of my biggest misconceptions was that I thought that I would be appreciated by my Malawi respondents and informants because I had a child in tow. . . . After all, this was a setting where the average woman would bear almost 6 children over her lifetime. Surely, the women would relate to me and tell me what they were really thinking, right? Another selfish and totally naive thought. In contrast, the Malawians didn’t even bat an eye at the fact that I dragged this child with me across multiple oceans and continents and was up with her all night just so she could be here. And why would they? For Malawians, it was only normal for a mother to have her young breastfeeding child in tow—nothing extraordinary or heroic. This didn’t give me credibility, but instead raised more questions about ‘where was my husband at?’” (Her husband had only stayed for a short time)

Was there anything that eased the challenges of living abroad with your family?
“Luckily, a sweet Malawian woman, a mother herself, carried Chiara around all day on her back to soothe her. The nanny didn’t speak English and I regrettably didn’t speak much Chichewa. I just crossed my fingers that my messages, communicated through another grad student who spoke some Chichewa, were properly transmitted.”

Eric is a graduate student who has long planned to conduct research abroad and expected to spend much of his life working, living, and traveling outside of the United States. In 2010, he married and planned for his departure to collect data in sub-Saharan Africa. As his departure loomed, his wife had a psychotic breakdown and was hospitalized for two weeks. She was subsequently diagnosed with bipolar disorder, the first either of them learned of her mental illness. Prioritizing his marriage, Eric canceled his trip and attempted to re-direct his research focus to allow him to remain closer to home. Although Eric’s marriage ended three years later, he does not regret putting the relationship first or putting his travels on hold and fully expects that, down the road, family and living abroad will come together for him.

What did you learn from this experience?
“Life events happen that you might not be able to anticipate and that can alter your timeline. . . at that moment, I didn’t mind putting things on hold for a while. . . . I know [my wife and I] had talked about taking turns going to each others’ field sites, but the long-term health issues complicated things.”

Has this changed the way you envision your future abroad?
“I think it’s totally possible, though, and in the future I hope to have my family with me in the field. I really think it can be such an amazing opportunity to grow as individuals and as a family. I fully intend to live and raise children outside of the States for significant periods of time.”

Sometimes, it seems as though everything comes together. Sustainable funding comes through, jobs can be easily left, relocated, or put on hold, and living with your family in another country is suddenly this amazing, and very real, opportunity. But this doesn’t always happen, and even when it does, it doesn’t mean everything is naturally easy or straightforward. Fortunately, the difficulties and complications don’t take away from the growth and learning that are central to living abroad and the multitude of decisions around it.

Stacey McKenna is a writer, anthropologist, equine advocate, rock-climber, tattoo collector, and aspiring yogi. A long-time vagabond, Stacey has lived all over the U.S. as well as in France, Austria, Morocco, and Canada. When not adventuring overseas, helping retiring racehorses find second careers, or tramping about with her husband and dog in the Western United States’ beautiful mountains and deserts, she writes about an array of issues related to travel, health, culture, human-animal relations, and social inequality. Though she has been living in Fort Collins, Colorado for over 7 years now,Stacey still considers herself a wanderer at heart. Follow her explorations via her blog or on Twitter @mckenna_stacey.

No Responses to “The “Nuclear” Family Abroad”