The Journey Back to Spain 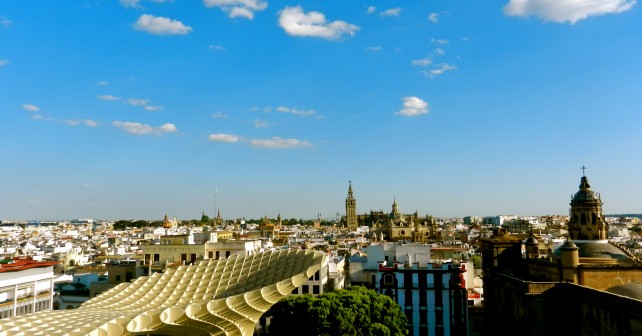 “I suddenly have an offer for the next year of my life, and it’s somewhere I know and love: Andalucia, Spain.”

It’s two days before graduation, and I’m checking my email. My graduate cohort has been celebrating our upcoming commencement for a week straight and I’ve ignored my inbox. I see a subject IN CAPITAL LETTERS, in Spanish. I assume this is another administrative message from the Ministry’s automated system, meant to tell all applicants the same thing they’ve been telling us for months: be patient.

But I’m wrong. This is an assignment. Not a homework assignment, but a placement. A job placement. I suddenly have an offer for the next year of my life, and it’s somewhere I know and love: Andalucia, Spain.

In 2004, I studied abroad in Granada, Spain with the American Institute of Foreign Study (AIFS). It was a traditional choice: junior year, spring semester, host family, language acquisition. At the time I had no knowledge of just how much the country and its people would impact my life, and even less of an idea that I would one day return as a teaching assistant, or auxiliar de conversación.

The Spanish Ministry of Education has a bilingual project intended for K-12 and adult language schools throughout the country. Seeking native English speakers with a bachelor’s degree at minimum, thousands of people apply for now more than 3,000 positions in the country. The process itself is a slow one, mired in bureaucratic red tape and convoluted online processes. When applying, you can select three regions of interest to you, and the rest is up to fate (and your number in line).

Several months later, I resigned from my full time job at a local university, said goodbye to my parents and hopped on a plane. My destination was a tiny pueblo between Huelva and Sevilla, by the name of Bollullos Par del Condado. I picked up two roommates, found an apartment, and chose to live in one of Andalucia’s true gems: Sevilla.

Anyone who has been to Sevilla knows its charms. It’s hard to resist the winding streets of the Centro, and the pungent orange blossoms that stretch from the train station to the river. Our apartment was nestled in the barrio of Triana, polka dotted with its flamenco birthright and colored with gypsy history.

Not every day was sunshine and oranges. There were rainy days, and cold days. On cold days, I could barely feel my feet in our secondary school, and my students kept their winter coats on. We never saw snow but the rain made our open concept school buildings drafty and cold. I worked with students aged 11 to 16 years old, working in classes from Chemistry to History to Geography. More than just English lessons, these were opportunities to share American culture, and my own life story.

As the students got to know me, they picked up on the fact I was eager to speak Spanish, and would sneak me local vocabulary when they were supposed to be practicing their English. They roped me into conversations about curse words, and pop music, and Thanksgiving. Their preconceived notions borne of movies and their elders were sometimes hilarious and other times mindboggling. Regrettably, I had to confess I did not know Justin Bieber personally and had never been to the Grand Canyon.

Of my 36 fellow teachers, only six were bilingual. They dazzled me with their colloquialisms and kept my grammar functional, correcting me when necessary. They teased me relentlessly when I missed a joke, and exclaimed appropriately each time I took another weekend trip somewhere new. One professor asked me if everyone in America had a parking space and a pistol. Many more wanted to know why I’d come to Spain again: did I plan to stay in its whitewashed walls?

It’s safe to say a part of me will always stay in Spain. That year felt like a vacation from my real life, something myself and my fellow auxiliaries remarked upon constantly. We spoke a slick mix of Spanglish and stopped correcting each other after a while because it was no longer necessary. I think of my fourth year students when I hear corny pop songs that they made activities about, and I think of my first year students when I wear the bracelet they gave me when I left. When I slip into a conversation and begin to drop my S’s and “eat my words,” a keen listener will tell you that I learned my Spanish in southern Spain. I laugh and agree, not only because it’s true, but because I’m proud of that small fact: linguistic proof that a place has made its mark on me, for good.

Kelly Holland is the Interim Director of Study Abroad at Eastern Illinois University in Charleston, Illinois. A Pennsylvania native, born and raised on the East Coast, she holds a B.A. in International Business Management and Spanish at Moravian College. In May 2010, she completed her M.Ed. in International Education at Lehigh University and spent the following year abroad in Spain teaching English for the Spanish Ministry of Education. Prior to joining EIU in October 2011, she spent four years on the staff at Lehigh University. Kelly continues to blog about international education and travel at thisblonde.wordpress.com.

No Responses to “The Journey Back to Spain”