A Draft of Guinness and a Dose of Home 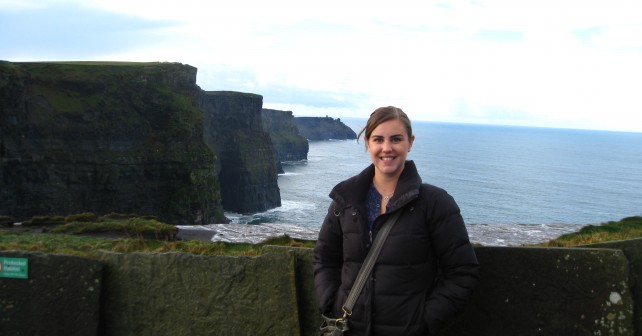 “Building a Guinness is an art form.  It takes the perfect glass at the perfect angle to get the best pour.  It needs time to settle, the brew cascading down to form the creamy head.  Then the glass is topped off, making the perfect pint.”

Guinness is an art I enjoyed many times during my trip to Ireland in the fall of 2010.  I was studying abroad in London at the time, and had taken a weekend trip to Ireland with a few friends.  The thirst for a Guinness drove us from our hostel in Ennis to a local pub.  We savored pint after pint while enjoying a feckin’ grand impromptu performance by local musicians.

While savoring our pints and laughing about the previous nights adventures, a small, wrinkled Irish man approached us and asked, “Excuse me, ladies, but are you American?”  We all instantly froze, glancing at one another, trying to decide the nature of the question.  Not knowing if our answer would be well received, we hesitantly smiled and nodded yes, we are Americans.

“I knew it!” he exclaimed, a smile lighting up his tired, well-worn face.  “I knew from your accents that you must be Americans! I love America!”

He asked us where we were from, and much relieved my friends responded- Minnesota, Delaware, New York.  Lastly, I responded, “I’m from New Jersey.”

“New Jersey!” he exclaimed.  “I love New Jersey!  I lived there for 16 years, and they were the best years of my life!”

Pouring a Guinness is an art form. Just like dealing with reverse culture shock.

Incredibly excited by his discovery, we began talking.  We quickly realized that he had lived about 20 minutes from my home.  Heck, we were basically neighbors!  He told us about his time spent in New Jersey, his friends, his work, his trips to New York City, all the things he loved about the Garden State.  While sipping on our pints, he shared the story of how he fell in love with a Jersey Girl.  He was heartbroken when she turned down his proposal and declared she could not return to Ireland with him.  He returned home, crushed, and never married.

“I’ll never forget my Jersey Girl,” he said, a small and weary smile gracing his face.  “She was the love of my life.”

About three weeks later, I found myself back in New Jersey.  Newark Airport, to be exact.  I unwillingly said goodbye to the few friends I had flown home with, unable to shed a tear.  I spent the previous night in London saying goodbye to all the amazing people I had met, both laughing and crying the night away.  I had no more tears to shed, although I felt torn apart.  I had left a part of myself, the better part, perhaps, in London.

I’m very lucky, or maybe just very open minded, as I’ve never really suffered from culture shock when traveling.  Sure, there were days I would have gladly promised my firstborn child for a Taylor ham, egg and cheese sandwich on a Jersey bagel, but that’s it.  I’ve never felt completely overwhelmed by a new culture, or felt crippled or incapacitated by homesickness.  My friends and I joke it’s because I’m emotionally stunted, but I think I’ve always just been too caught up in the amazing things I was experiencing abroad to think about what I was missing at home.  And home, meaning New Jersey, had lost all of its sparkle to my eye.

That’s why returning home from London was hard for me.  Very hard.  Although I’ve never dealt with culture shock, I’ve dealt with reverse culture shock on multiple occasions.  Returning home from London, however, was by far the worst.  I mean, I had just spent the best four months of my life in one of the world’s most amazing cities, traveling every weekend and constantly making new friends.  And now I was standing in the Arrivals terminal of Newark Airport, or as my father likes to call it, the armpit of the nation.  Great.

It was also hard feeling like I couldn’t talk about my amazing experiences abroad.  When reuniting with friends they would ask, “So how was your trip?” and I answered, “It was amazing, thanks!”  Then you are allowed maybe 10 minutes, tops, to elaborate or share a few stories before everyone loses interest (unless you are talking with a fellow traveler!)  Because if we’re being honest, nobody really cares about that time you got hit by a bike in Amsterdam or got sick after drinking water out of a fountain in Barcelona (I swear it said “Agua Potable!”)

So between me bottling up everything and my lackluster feelings for New Jersey, I was bound to have a hard time dealing with reverse culture shock.  In hindsight, I realize that I was being unfair and rather harsh about my opinion of Jersey, but to put it plainly, I was over it.

That’s why I delved into my travel journal those first few weeks home.  I reread every word, and relived all the amazing adventures I had in London and around Europe.  In those first few days home, I reread the pages I had written about my trip to Ireland.  I remembered kissing the Blarney Stone, visiting the Cliffs of Moher and meeting a small, wrinkled man in a pub in Ennis.

When we met in that pub, I smiled and nodded as he shared his love for New Jersey with me.  I didn’t completely agree with him about all the virtues of the Garden State, but humored an old man as he reminisced about a life long lost to him.

After I returned home, however, I took time to think about what he was really saying.  The people are kind and welcoming- I have an absolutely amazing group of friends who are all from New Jersey, so obviously the people aren’t that bad!  The land is beautiful- I live in an area surrounded by woods, rolling hills and lakes, and my house is set back against a forest and protected land, which is gorgeous.  The proximity to New York City- this I agreed with wholeheartedly and try to take advantage of as often as possible.  And, of course, Jersey girls are the best in the world! Oh, and have I mentioned the bagels? New Jersey has the best bagels in the world, period.

“But I would like to thank him for helping me love my home again, and my thirst for a Guinness, which led me to him.”

Seeing New Jersey from a stranger’s perspective helped me appreciate my home again.  Really taking his words to heart gave me the kick in the butt I needed to really open my eyes and see my home with a fresh perspective.  Although his words weren’t a magical cure-all, over time they helped me overcome and deal with my reverse culture shock.  To this day, I think about his love for my home when I start to feel antsy or jaded about Jersey.  Although his insight can’t dampen the wanderlust burning inside me, he has made it enjoyable for me to be home again.

It’s been almost three years since that short trip to Ireland.  I can’t remember the name of the pub from that night.  I can’t remember his name.  The face of a small, wrinkled man that was once so fresh in my mind has begun to fade, blurring around the edges with time.  But I would like to thank him for helping me love my home again, and my thirst for a Guinness, which led me to him.

Sarah Morgan is a twenty-something, recent graduate of the University of Delaware. During her time at UD she studied abroad three times in Puerto Rico, Greece, and England, among other travels. Sarah is a self-diagnosed travel junkie and will be moving to Ireland in August with a Working Holiday Visa. Keep up with her on Twitter @SarahMorgan65.